Sharon Mossbeck is a conceptual artist based in Sheffield. She is currently working on an exciting new communal art project called The Thread of Life.

33-year-old Sharon lives on Jarrow Road with her boyfriend Michael, who is also an artist.

She grew up in the outskirts of Sheffield in Mosborough, with her parents and her older brother. After attending her local primary school, Sharon then went on to Westfield School until she was 16.

Following that, she started at college to study childcare and development, but quickly decided that it wasn’t for her. Instead, she switched courses and sat A-levels in psychology, biology and sociology.

Sharon decided that she was still hungry for knowledge and at 19, spent a year studying interior design and techniques. After college, she went on to be a general manager at her dad’s opticians, but she could always see her future in art. “I always wanted to be an artist, but I knew there were no jobs or steady wages in art, now I have actually become an artist, I have realised how right I was. I was going to wait until I was retired to take it up properly, but that was just too depressing.”

At 27, she finally decided to take the leap of faith and enrolled to Hillsborough College to study 18+ foundation art and design, before moving to Chester to study art at Chester University. “When I decided to go for it, and really get into my art, I knew I needed a qualification in order to be taken seriously.”

After university, Sharon moved back to Sheffield to pursue her art career. She is now a resident artist at Bank Street Arts.

She has worked on a few big art projects, but she is currently working on The Thread of Life. In order to kick-start her project, Sharon set up a crowd-funding campaign to raise £650, which involved contacting artists, companies and people she knew to back her project by donating. She was then given funding from Arts Council England, and DMC also donated materials.

The Thread of life is a project in two parts using the traditional methods of cross-stitch. Sharon explained that it was difficult to introduce cross-stitch to people in the form of fine art. “People always think of cross stitch as a twee form of craft, but I want to change their perceptions and make them realise that it can be art too.” “People have completely different views of tapestry and cross stitch. Tapestry is well respected, but people are in the mind-set that cross-stitch is just a bit crap. I want to prove them wrong.” 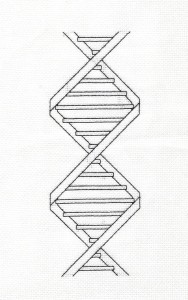 The first part of the project is a participatory section. Sharon is asking people to sew their own version of a DNA strand that she has designed. (The pattern can be downloaded here.) “I’m excited to see what the finished pieces are like, I want everyone involved to make their cross stitches as individual as they are.” She is encouraging participants to use all sorts of different colours and materials in order to represent themselves or their chosen concepts. Sharon has received a great reception, with people from all over the world getting involved. She said: “I’ve had responses from people in Canada, The Ukraine, America, Australia, France and Mumbai. It’s so exciting that they want to get involved in my project.” Sharon has held a number of free cross-stitch workshops in Sheffield and across the country, and will be adding more to her website soon. Each DNA cross-stitch submitted will be used as part of the Final Thread of Life art installation that will be exhibited in Bank Street Arts throughout November 2015.

For the second part of the project, Sharon is working on her own large scale cross stitch piece. In this, she is using imagery related to three fates from Greek mythology and is basing it on traditional Byzantine art. She said:”my own piece is quite sculptural, I am using cross-stitch in an experimental way that hasn’t been done before.” Sharon said that she had been kicked out of numerous Facebook cross-stitch groups for talking about her project. “I feel like the rebel of cross stitch, none of the middle aged women want me in their Facebook groups because The Thread of Life isn’t quite traditional enough for them!”

So for anyone interest in getting involved in The Thread of Life, here is your chance! The only condition is that you must work on 14 count Aida (standard sized cross-stitch fabric) of any colour. You will need a piece of fabric approx 17cm x 30cm. All you need to do is send your finished, unframed piece in to Bank Street Arts before 1st September 2015 along with the following details.

It is essential to include the above information. Unfortunately work cannot be returned, as it may go on to be exhibited at another venue after Bank Street Arts. However, you will continue to be acknowledged for your work. All work must be sent to:   The Thread of Life Bank Street Arts 32 – 40 Bank Street Sheffield South Yorkshire S1 2DS UK